"Bringing you a deeper understanding of your animal friend!"

What is animal communication?

Animal communication is telepathic communication, or can be described as deepened intuition. Communicating telepathically with animals means mentally sending and receiving images, thoughts and emotions. In this kind of communicating you DO NOT read body language or make guesses based on species, breed or physical behavior.

Animals are masters at telepathy or intuitive communication. We have all seen animals communicate on a non-verbal level, resulting in play or a disagreement. In humans on the other hand, we have suppressed our telepathy by using other forms of communicating such as verbal speech, reading and writing. We still use it- for example; the "bad vibe" we get from someone, that "gut feeling" you have about something, or when you "just have a hunch" about a situation. Or, at times you may know who's calling before you pick up the phone, or you begin thinking of a certain friend, and they happen to call. Those feelings are your intuition at work. Just about everybody has had an experience that can only be attributed to intuitive ability. You may already have a "feeling" about what your animal friend wants or needs.

Animal communication has no geographic boundaries. Time and space are not barriers. Amanda can just as easily "hear" an animals thoughts and feelings across the globe as she can in her own back yard. She can even contact animals that have passed on.

Although not a common practice today, animal communicating was popular with both the Native Americans and the Aboriginal peoples. Saint Francis was the first human in recorded history to value the life of animals as highly as humans and to speak openly with them as equals. Saint Francis loved all of Gods creatures, and treated all animals as fellow beings; as brothers and sisters. He preached to flocks of birds, spoke with rabbits and fish and blessed all animals.

Perhaps the most famous story of Saint Francis is The Little Flowers of St. Francis. As the story goes, a wolf was terrorizing the people of Gubbio and Francis had pity on the people, so he negotiated with the wolf not to hurt anyone. In the presence of all the people the wolf agreed and raised his paw into Francis' hand as a pledge. From that day forward, the wolf no longer threatened anyone in the town. 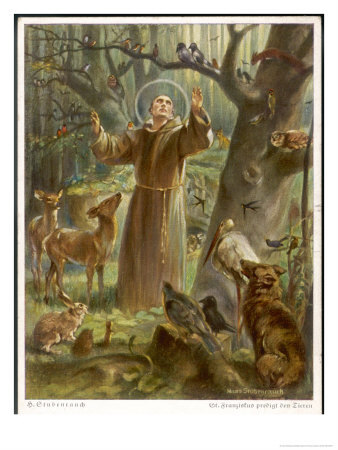 ~For the skeptics of the world:

At one time it was declared that women did not have souls. At one time those of other races were treated as livestock are now treated. It was believed at some point the Earth was flat and by traveling too far you would fall off the end of it. We have evolved from such ridiculous beliefs. Unfortunately, many people today believe that animals are inferior and simple creatures of habit, that their behaviors are those stemming from genetics. Much of society believes that animals cannot have their own thoughts, feelings and emotions, let alone the ability to convey them. It is still a common belief today that animals do not have souls.

It's only a matter of time before these beliefs too, are known as absurd and outdated myths as those of our past.